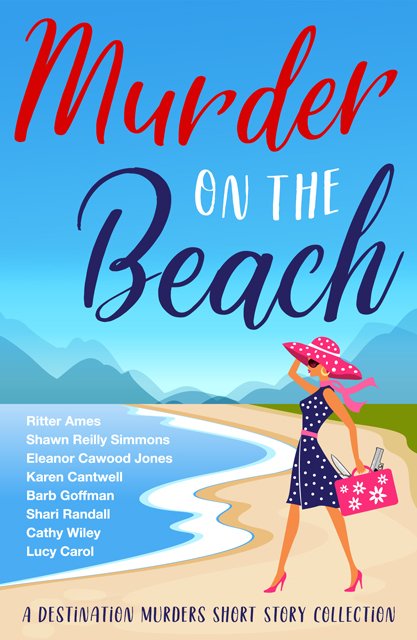 MURDER ON THE BEACH, is an anthology of cozy beachy standalone short stories—perfect for a summer read. It is available now at all booksellers and currently at a New Release price of only .99, but it will soon go to its regular $3.99 price.

FRUGAL LISSA NEEDS A BREAK, Ritter Ames, the newest short story in the Frugal Lissa series. Life has been anything but a beach lately for Lissa and Abby, so they head to Galveston for a girls’ weekend. All they plan for is sand, sea, and applying sunscreen regularly. Until the dog digs up a dead body.

COAST BUSTERS, Karen Cantwell, another short story in the Barbara Marr series. Barb and her friends figure Florida and a quirky chic resort would be the perfect Mom vacation…until it’s not.

BEACH PARTY BODY, Lucy Carol, a new story from the world of Madison Cruz Mysteries. A photo shoot on the beach should be fun, especially when the surf’s up. But when someone’s wild behavior turns deadly, the party’s over!

A TALE OF TWO SISTERS, Barb Goffman. When Robin’s sister gets married at Lake Michigan, Robin will do whatever it takes to protect Emma’s special day.

CABO SAN LOCO, Eleanor Cawood Jones. Lorrie George wants to enjoy a celebratory trip with her friends to Cabo San Lucas, Mexico. But the all-expenses-paid, exclusive trip keeps getting ruined by attempts on her friends’ lives.

FOOTPRINTS IN THE SAND, Shari Randall, a new short story in the Lobster Shack series. A jewelry theft and attempted murder upset the tranquility of Allie’s quaint New England town.

BAY OF RECKONING, Shawn Reilly Simmons. It’s Sabrina Westfall’s job to ensure that the Miss Crab Pageant, a vital part of the Summer Crab festival on the eastern shore of Maryland, goes well. But what is she supposed to do about the dead bodies?

“Each story features great characters and a story that kept me engaged the entire way through. All these stories can be read as stand-alones whether they are part of a series or not. The one thing these stories all have in common is the beach. But even then, the beaches vary. While we stay in North America, we don’t visit the same beach twice. That was part of the fun – seeing where we would be visiting next. Each story took me roughly 40 minutes to read, with some being shorter or longer. This is the first in a series of Destination Mysteries short story collections. Based on this book, I’m already packing my bags for the next vacation. If you are looking for the ultimate beach read for the beach this summer, Murder on the Beach will be perfect for you. Even if you stay home, you’ll enjoy these eight great mini-vacations. ”
-- Mark Baker, book reviewer at Carstairs Considers blog